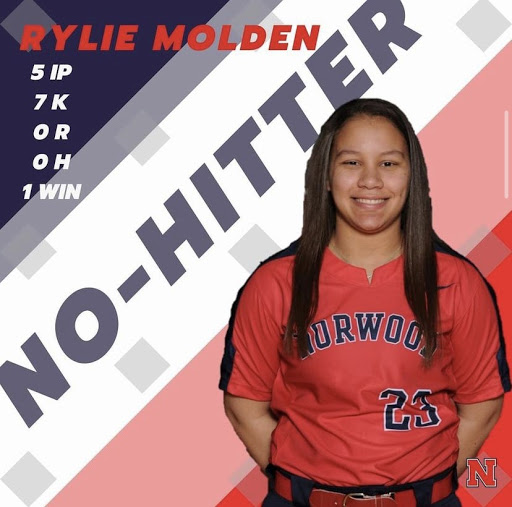 Softball season is in full swing, and senior Rylie Molden is tallying up the wins.

Molden has been the only pitcher on the softball team since her freshman year, and in her ¨third season¨ playing, she is throwing no-hitters and getting closer to breaking school records. She is a four-year varsity player, but only playing her third season due to COVID-19 causing the cancellation of her junior season.

Molden most looks forward to winning. All of these awards and good games right in front of her with the spotlight, but her goal this season is to just win as many games as possible. Although the main goal is winning, Molden says they are something she thinks about every game. She says she gives it her all every game to leave her mark on Norwood High School.

The record she’s closest to breaking is pitching wins. A win in softball for a pitcher is determined by who is pitching when the team takes the lead. This record was kind of a given, since she has been the only pitcher her entire high school career, but she is near breaking the record in only her third season, imagine she had a fourth. Other records she is close to breaking are unknown as the athletic director has not yet looked into it, but there are more out there that she is likely to be close to including strikeouts, shutouts, earned run average over a four-year career and possibly win-loss percentage.

Another record she could possibly be close to would be no-hitters, and she helped her case for that Friday, April 9, adding another no-hitter to her resume. In the game, Norwood beat St. Bernard 26-0. Molden pitched five innings, gave up no hits and had seven strikeouts. She also hit five for five with a double and four singles, a sacrifice fly and six runners batted in.

It’s safe to say Molden is probably one of the best pitchers to ever come through the Norwood softball program and could be the best if given her fourth season.